The 1622 capture of Hormuz by the joint forces of Safavid Persia and the British East India Company was a defining moment in the history of Iran’s relationships with Europe. Strategically situated at the mouth of the Persian Gulf, the island kingdom of Hormuz had been conquered by Afonso de Albuquerque in 1507 and made a vassal state to Portugal in 1515, remaining for more than a century thereafter a key military stronghold and a nexus of maritime trade in Portuguese hands. A catalyst of political interactions and a crossroads of economic and cultural interests, the fall of Hormuz offers a fascinating instance of the dynamics of globalization at work in the early modern period, interlocking identities and allegiances, confronting world views, political empires and commercial ambitions, reconfiguring communities and networks, repurposing histories and their receptions.

Our one-day conference held on the 400th anniversary of the reconquest of Hormuz aims at bringing together the polyphonic accounts and kaleidoscopic perspectives around it, from the Persian chronicles of religious and monarchic triumph to British EIC agents’ reports of unfulfilled financial expectations, through Portuguese negotiations to relocate their interests and activities in the region, Dutch VOC competitors’ outlook on the EIC’s deal with Persia, the position of Persia’s Ottoman rivals in Basra at the other end of the Persian Gulf, and even the correspondence of an outsider witness such as the Italian traveller Pietro Della Valle reporting on Hormuz before, during, and after its capture. We are particularly interested in the complexity of configurations brought about by the intersections of geopolitics and trade, but also by cultural practices and the circulations of people and knowledge. Making room for material traces and literary representations, we also wish to include the afterlives of Hormuz and its conflicting memories east and west as both a dialogue of cultures and the expression of hegemonic ambitions.

We invite proposals for 20-minute papers especially on (but not limited to) the following topics:
-Physical and textual contact zones and memory sites
-Passeurs and go-between figures (commercial, diplomatic, ecclesiastical)
-Local and global connections
-Literary and artistic representations
-Material traces and cultural artefacts

Please submit your abstracts (max. 300 words) and a short biographical statement (max. 100 words) by 15th January 2022 to Edmund Herzig (edmund.herzig@orinst.ox.ac.uk) and Ladan Niayesh (ladan.niayesh@orinst.ox.ac.uk). We plan to publish a selection of the papers presented at the conference as a special issue of a scholarly journal.

Our conference benefits from the support of the Oxford Centre for Early Modern Studies and the Oxford Nizami Ganjavi Centre, ERC-TIDE (Oxford), LARCA (CNRS, Université de Paris), and the Hakluyt Society. 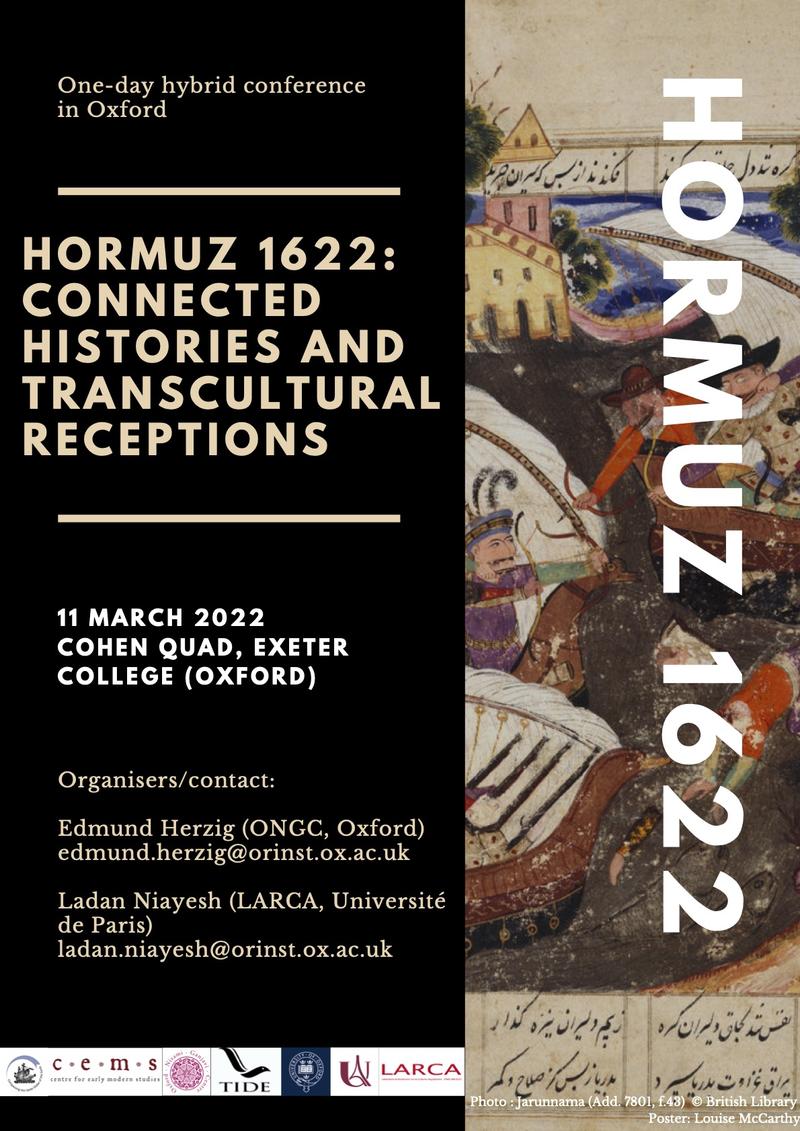