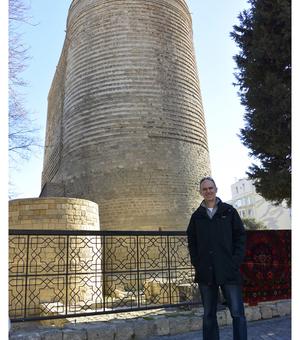 Elio Brancaforte (Ph.D. Comparative Literature Harvard) is an Associate Professor in the Department of Germanic & Slavic Studies at Tulane University, New Orleans. He works on early modern European travel literature about the Middle East, the Caucasus, and especially the Safavid Empire.  His scholarly interests include translation, cultural exchange, theories of representation, the history of the book, German baroque drama, and the history of cartography. The relationship between word and image is an underlying theme in much of his research.

As an ONGC fellow, he will work on several projects relating to Azerbaijan: a) he is organizing the translation into English of the accounts of six early modern European travelers to Safavid Azerbaijan; b) he is also preparing a book on Engelbert Kaempfer in Azerbaijan, which will examine this early modern German traveler’s stay in Shirwan, 1683-1684; and c) he will curate an exhibit on “Travels to the Land of Silk and Fire: Encounters between Britain and Azerbaijan (1561-1918),” which will be held at the Royal Geographical Society.