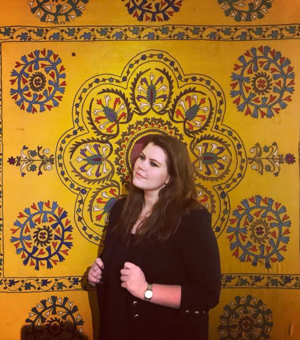 Meredith Morrison is a DPhil student returning to Oxford, where she discovered her love for Central Asian history and literature during her MPhil in Islamic Studies and History (2015). She obtained her BA as a double major in Political Science and Modern Middle East Studies (with distinction) from Yale University in 2011. In her undergraduate studies and subsequent work, Meredith spent time all across the Middle East, finally settling in Lebanon, where she has lived nearly eight years. Her non-academic career has included positions with the Council on Foreign Relations (US), President Clinton’s foreign policy team, and McKinsey & Company’s Middle East Office. Meredith’s doctoral research builds upon her MPhil thesis, which employed a close reading of the poetry of two early medieval Persian poetesses, Rābi‘a Balkhī and Mahsatī Ganjavī, to study the position of women in early medieval Persianate Islamdom. In her DPhil, Meredith is examining the Persian poetic form qaṣīda and its practice by poets Amīr Muʿizzī and Anvarī in the court of Sultan Sanjar, in which Mahsatī Ganjavī composed her rubā‘īyāt, as well. She is interested in delving further into gender dynamics in the period, as well as exploring how poetry can enrich the study of history.