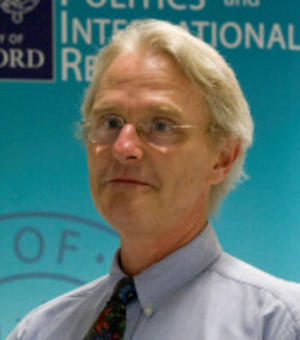 Lester B Pearson Professor of International Relations and Fellow

Professor MacFarlane is a specialist on Russian foreign policy and the regional dynamics of the former Soviet Union, with particular reference to that regions southern tier. He is also interested in the impact of international organisations in the management and resolution of civil conflicts and also in the political and economic transitions of former communist states.

After a career in the United States and in Canada, he moved to Oxford in 1996 as the first Lester B. Pearson Professor of International Relations.From 2005 to 2010 he was Head of the Department of Politics and International Relations. From 2008 to 2010 he was Deputy Head of the Social Sciences Division at Oxford. He is currently a member of the Council of the University and serves on numerous University committees.

Beyond Oxford, he was a Faculty Associate of the Geneva Centre for Security Policy from 2004 tto 2010. He held a visiting appointment at the College of Europe (Bruges) in 2007-2008, where he taught a course on the contemporary security agenda.In the summer of 2008, he was S. Rajaratnam Professor of Strategic Studies at the Nanyang Technological University (Singapore). He iwas a a visiting professor at the Centre for Social Sciences (Tbilisi State University, Georgia) from 2010 to 2013, and has a strong interest in higher education reform in the former Soviet Union.

He is an associate research fellow in the Russia-Eurasia Programme at Chatham House, and he chairs the board of the Center for Social Sciences, Tbilisi, Georgia.